Horrid Henry: The Movie is a non-animated film based on the fictional character: Horrid Henry. The first British film for children to be shot in 3D, it was released in Summer 2011 (29 July 2011). Nick Moore directed the movie.

At the start, Horrid Henry [Theo Stevenson] tries to steal cookies (biscuits in the UK) from Moody Margaret [Scarlett Stitt]'s Secret Club and succeeds, but before he could eat them, his mother [Siobhan Hayes] interrupts, telling him to do his homework. Henry screams in despair. After he is introduced to the audience, he refuses to do his homework and is lost in his dreams.

In the morning, Henry's mother wakes him up and tells him to go to school. When she reminds him to take his homework, he remembers that his homework is in a really bad state and leaves it behind. When he goes to school, Henry tells his friend Brian that he has not got his homework, asking him to write a forged excuse letter. The letter said:

When Henry and his other friends get to their seats, Miss Battle-Axe [Anjelica Huston] is taking the register. When she asks everyone about their homework, Henry tells her that he has not brought his homework, and makes an excuse by showing her the fake letter, to no avail as the teacher knows that it is a forgery. He gets triple detention for failing to do his homework, failing to bring his homework and for presenting the forged note. She writes the spelling for the word 'Homework'.

Miss Oddbod [Rebecca Front] tells Henry's class that the school inspectors are coming and they don't want any 'unpleasantness'. With Henry in detention, his friends join him to practice for a talent contest, but their rehearsal is stopped after Miss Oddbod and the school inspectors hear them and stop them. As Henry and Perfect Peter [Ross Maron] are going home, Margaret tries to throw a water balloon, but Henry got that and tricks her into throwing a balloon at her. As she tries to throw a balloon at him, Henry escapes and Peter gets hit. Henry introduces his pet Fang and all the things he can do. When he is singing about being a king, Peter comes in and tells Henry he's supposed to be doing his homework. He then tells on him for not doing his homework. Henry turns into a dinosaur and scares him, making him run to his room. As Dad [Matthew Horne] marches up to his room, Henry tricks him into thinking that he is doing his homework (Physics).

The next day, Margaret makes a plan by pouring goop at him, but Miss Battle-Axe falls for it, blames Henry, and gets fired. In despair, she sends everyone home early. Henry notices this at home on a news report.

It is revealed that Ashton Primary, the school Henry attends, is to be [deliberately] closed and Vic Van Wrinkle [Richard E Grant], the headmaster of the Brick House School, stands to make a fortune from the resulting influx of pupils.

The next day, Miss Battle-Axe disguises herself as a male teacher, hoping to get her job back, but Miss Oddbod discovers her and sends her out. Also, her class is forced to join Miss Lovely [Parminder Nagra]'s class. But then, Henry and Margaret get into a fight and launch a pot full of goo [which Henry claims it isn't his], which hits Miss Lovely. As his punishment, Miss Oddbod bans the Zero Zombies from the talent contest.

Later, at home, Henry discovers from his Rich Aunt Ruby that there will be a try-out day at Brick House, which his Great Aunt Greta books Peter for, and pays for him to go. She sends Henry to Our Lady Giddiantus, a girls-only school, which Margaret enters also. whilst trying to escape, Henry discovers a picture of Miss Battle-Axe, which suddenly says 'Oh, Henry, you horrid boy!'. Trying to sneak out, they get detected, but despite this, the two of them escape.

Meanwhile, the try-out day at Brick House is underway. Miss Lovely discovers something odd about Vic Van Wrinkle and, whilst Peter sings 'Frere Jacques' in different ways to create a distraction, she goes to find out his plan, only to get caught by Vic Van Wrinkle in the process. She gives Peter his Good-as-Gold book, leaving Peter confused, and suspicious about Brick House.

At a Purple Hand Gang meeting, Henry comes up with a plan to save the school: get back into the talent contest, win it, and become 'famous enough' so that they won't want to shut the school down. With the help of Moody Margaret and her sidekick Sour Susan, Henry and the Zero Zombies sneak into the Talent Contest, disguised as pupils from Lady Giddiantus, past Soggy Sid [David Schneider], with Henry discovering a mural of Miss Battle-Axe saying 'Oh Henry, you horrid boy!' in the process. During their performance in front of Ed Banger and the Killer Boy Rats, Sid discovers the Zero Zombies and tries to ruin the performance, but Margaret and her friends [and Vicious Vicky, Sour Susan's sister] manage to stop him. Ed Banger is very impressed, and Henry wins the talent contest.

But, at school, Mr Soggington is removed from the school as well with a very sore bottom after Vicious Vicky bites him on stage. Henry is found out that he was on the show and Miss Oddbod explains to him that his theory was wrong; stating the school would still close down, regardless of how famous Henry would become. and to top it all off, she tells him that he should have thought about trying to save the school from closing down before he started 'being horrid'. Understanding, Henry sadly leaves the office.

Sitting in his bedroom in despair, Henry is called into his Purple Hand Gang fort where Margaret and Peter explain he has been invited onto '2 Cool 4 School' where he can win a Cash Prize if he wins, so he can give it to Miss Oddbod and she can bribe the inspectors to go away. After completing some challenges, the Presenters show him confiscated toys in the Confiscated Cupboard but Henry insists on the Cash Prize where he has to meet a 'Terrible Teacher' which is revealed to be Miss Battle-Axe. Miss Battle-Axe asks him to spell a word which he had misspelled earlier in the film (Homework), which he succeeds in doing. Miss Battle-Axe congratulates Henry and gives him the Cash Prize, stating he's only the second person to win, and a special badge reveals she'd won the show before, a long long time ago, possibly before Henry was born. Henry thanks her and hurries with Margaret to Miss Oddbod.

Meanwhile, Van Wrinkle holds Miss Lovely, Peter, and his friends (who went on a rescue mission to Brick House) hostage in his office. But Miss Lovely tricks him into explaining his plan while she has her mobile phone out so that Miss Oddbod can hear on her end. It is revealed that Vic Van Wrinkle is planning to close down lots of other schools as well as Ashton Primary so that the parents of the kids who went to those schools would have to pay him lots of money for their kids to go to Brick House. Miss Oddbod hears and stops writing the contract she was given. Hearing the sirens and the police arrive at the scene, Vic attempts to escape, but with Peter tying his shoelaces together, falls out of the window, and is caught by the police and is arrested as well as his partners. Henry and Margaret manage to get to Miss Oddbod which Peter instantly offers her the money but she explains she heard Vic Van Wrinkle's plan and does not need the money and therefore returns the money to which they will have the party of a lifetime

The next day, Henry's family and friends congratulate him on saving the school and, as promised between Henry and Margaret, have the party of a lifetime. Then, the entire cast all dance to 'Everybody Dance' which to Henry runs to the audience to splat his famous 'Purple Hand Gang' logo.

Reception of the film is very mixed, Derek Adams of Time Out gave the film mild praise stating:

Rotten Tomatoes gave the film a 9% stating the following:

The Movie a positive review; the rating average is 3.62 out of 10. Common criticisms included the unfunny, juvenile humour, stuttering plot, and unimaginative use of stereoscopy. The bright colour palette was widely praised, but generally said to be wasted, given the overall low quality of the film.

'Thinly scripted, even for a kidpic, but luridly colored enough to keep even nap needing tots (or parents) awake, this sophomore effort by Brit helmer Nick Moore (Wild Child) reps something of a waste of its impressive roster of supporting thespian talent, while its use of 3D is likewise less than imaginative.'

Common sense media gave the average a 2 out of 5, stated: Forgettable British kid comedy is pretty horrid indeed. Parents reviews gave it a 1 out of 5 stating (The most read review):

Save your money... The kids didn't even watch 15 minutes of it. The music was terrible, and there was already a lot of it in that 15 minutes. We rented it at 8:00 in the morning, and it was returned a couple hours later. Really disappointed.

Kids reviews are different, giving it a 2 out of 5, stating:

DONT BOTHER! Watched five minutes and I was on the verge of falling asleep. It's just so bad! Horrid Henry actor is clearly completely unexperienced and as for Perfect Peter is voice is ANNOYING. Mum and Dad are terrible actors as well. DONT BOTHER!

The Trailer for 'Horrid Henry: The Movie 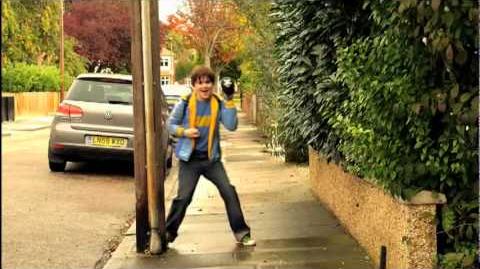 The transcript can be found here.

See on the right.

Community content is available under CC-BY-SA unless otherwise noted.
Advertisement