Noooo!!! is Horrid Henry's trademark scream, which is used whenever something bad happens, usually him getting in trouble.

Along with 'It's not fair!', it is one of Horrid Henry's most-used catchphrases. Henry uses this catchphrase to open and close each episode and sometimes, during an episode. Whenever it happens, the camera mostly zooms into Henry's mouth. Everyone else screams: 'Noooo!!!' as well, but Henry screams it the most.

Besides Henry, other characters have screamed, 'Noooo!!!' including Perfect Peter in Horrid Henry's Christmas and Dad on at least one occasion.

Other than Noooo!!!, Henry screams other things as well. This happens in some episodes like the examples listed below.

Other than at the beginning and end of every episode, Henry screams Noooo!!! during the episode as well.

Other than the usual scream, there are other variants as well.

Moody Margaret screams 'NOOOO!' because she doesn't want Dad to drive her to school.

Rude Ralph and Horrid Henry scream 'NOOOO!!!' after realising that the tickets they had won were Number Gnome ones.

Everyone in the class screams 'NO!' after Miss Battle-Axe gives them all detention. 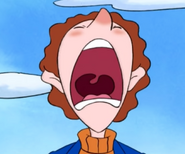 Dad screams 'NOOOOOO!' after Mum suggests that the spot where his new BBQ is would be good for her flowers.

Graham, Henry, and Ralph scream 'Noooo!!!' because the stew is landing on them.

All of Henry's classmates scream 'NOOOOO!' because of Stuck-Up Steve coming to Ashton Primary School. 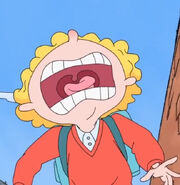 Peter yells 'Noooooo!' after a dog eats his candy floss.

Miss Battle-Axe, Mr Soggington and Horrid Henry all scream 'NOOOOOOO!' after finding out they all have to do ballroom dancing together.

Mum and Dad yells 'NO!' after finding out that they have to take a course to be better parents.

Bossy Bill screams Noooo!!! after Henry pours milk all over his head.

Peter and Henry scream 'NOOOO!!!' because they found out it's a nightmare.

Margaret and Henry scream 'NOOOO!' because they both got detention from Wheely Walter.

Dad and Henry scream 'NOOOO!!!' because of two reasons: Henry can't watch TV because he needs to do homework, and Dad wears Mum's glasses.

Peter, Henry, and Ralph all scream 'NOOOO!!!' because their cake is eaten by Colin the Clown's leftover rabbit.

Nicola screams 'Noooo!!!' after being revealed as the true thief of Miss Oddbod's prize petunia and William, Andrew, and Graham's lunches.

Everyone at Ashton Primary screams 'Noooooooo!' after finding out that Henry won the Headmaster contest.

Fluffy meowing to open the episode.

Henry and Mr Soggington both shouted 'Nooooooo!!!!' because they both have octuple detention. 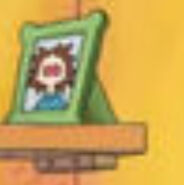 A picture frame of Henry screaming.

Henry saying 'I, HENRY, WILL RUN AWAY!' because he has no pocket money and wants to run away to somewhere in Africa.

Fang and Fluffy scream because there were no more pizza left.

Mum shouting 'HENRY!!!' after promising Dad not to shout to wake Henry up.

In Horrid Henry: The Movie, Henry screams 'NOOOO!!!' because he has to do his homework.

Henry also sometimes screams 'IT'S NOT FAIR!' instead of his usual 'Noooooo!'

Margret screams 'Noooooo!' after Miss Oddbod made Henry and Ralph fill in as substitute teachers for the day covering for Miss Battle-Axe.

Mum screams 'NOOOOOOOOOOOOO!!!' seeing Henry has spots on his face.

Henry screams 'NO!' after his family agreed to enter the Happiest family ever competition.

Henry says 'Here Comes Henry!' to Mr Nerdon who came to take over for Miss Battle-Axe.